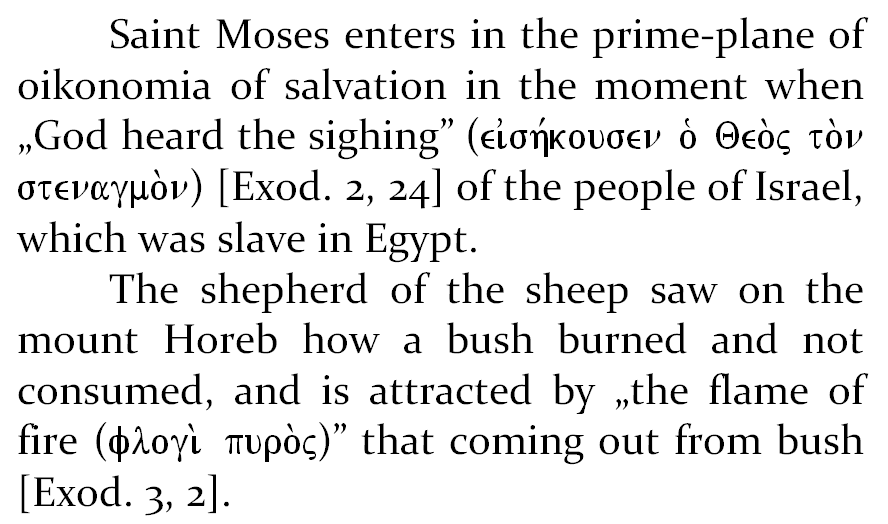 Although Exod. 3, 2 tells us, that into that language of fire was shown the Angel of the Lord, in the v. 4 not an Angel speaks with Moses, but the Lord[1]. The revelational discussion (Exod. 3, 4–4, 17) of the two is impressive, it having extensive details.

looked toward earth before the Lord (Ibidem)[2]. The interior state of Moses, then when he sees on God, is one of love obedient and not of ostentation. He feels that the place where God appeared to him is holy one and he receives the divine message with all liability. Moses is not considered worthy to lead the people of the promises (Exod. 3, 11), but the Lord just this thing waits: the self-denial of Moses and the putting of hope only in Him. 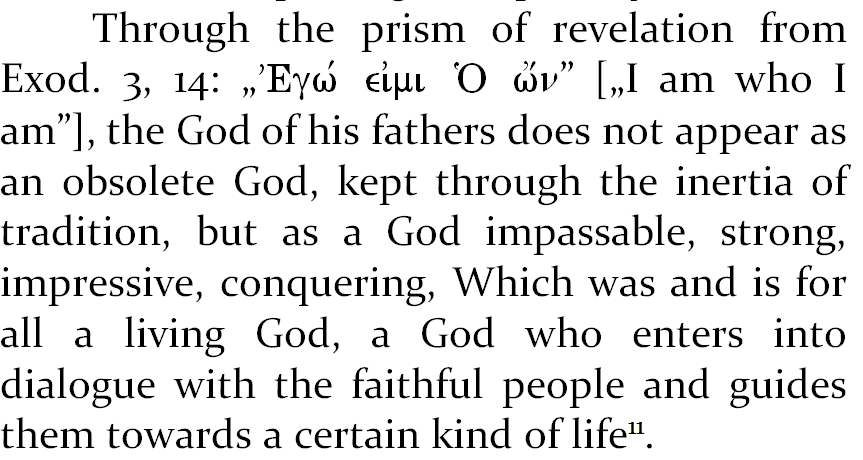 This God is the One who reveals Himself and from He comes out the divine brilliance.

„The pillar of cloud” and „the bright cloud” are two ecstatic descriptions, faithful the mode in that is seen the divine light sprang from God. From our point of view, the visions are descriptions of divine realities, discovered by God and in no way symbolic or mythical elements.

Just therefore we analyze all divine sights as living links, direct of God with the people and we see in ecstasy the most fully mode through which acquires the intimacy with God.

From putting in contrast of the places from Exod. 19, 17 and Exod. 19, 19 emerges that the coming of people to meet with God and his state at the base of mount Sinai is not identical with the state on the mountaintop, where God reveals Himself again in fire.

„The fume”, as well as „the cloud”, are ecstatic elements and not meteorological phenomena, as some simple „exercises of power” of God, through which to impress the mass of people from the base of mountain.

The discoveries of His glory are not cheap spectacular events, but they are constituted in divine oikonomic scores of human’s life and of the course of world history.

God is present on mount Sinai in the sight of Moses, is more intimate with him, in evident mode, but He is present and for people, He is in front of people, even if the people feels intimacy with God much more diminished. 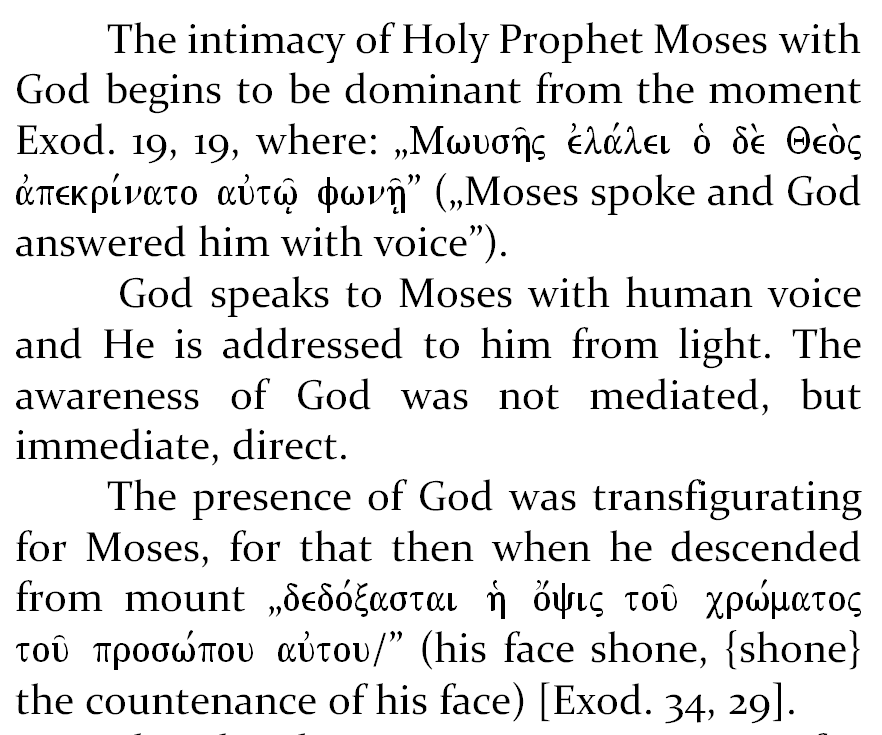 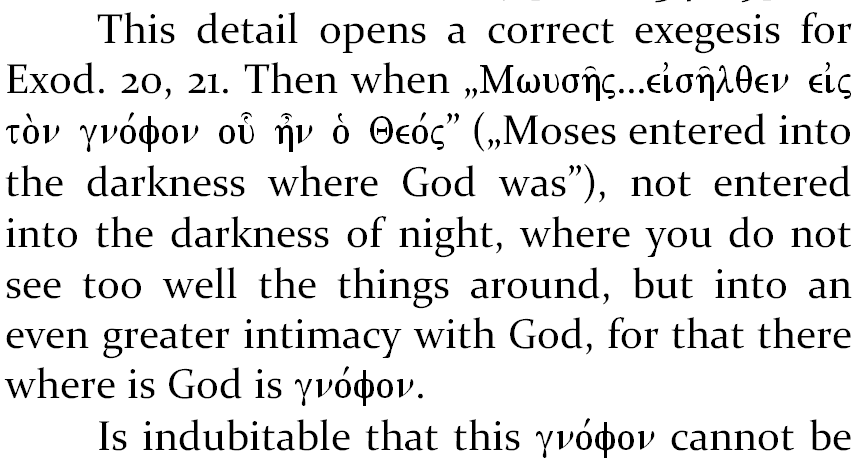 placed in antithesis with the glory, His light, as long as this darkness produces divine brilliance in the being of people. The paradoxical remark of Scripture conceals an ecstatic meaning, for that in the place where we enter at God we are no longer seen by people and we do not see anything other than on Him[5].

Moses does not know the passionate logic of the interval. He is in front of God, he talks with Him, his being is filled of divine light, of brightness and he bears the divine revelations as on some indelible fingerprints in his being. Therefore, he makes the things of holy tent after the face of those shown in mountain (cf. Exod. 25, 40; 27, 8), after the face of those on which he had seen in divine sight.

Moses is proving altogether open to God. He did not have something to hide from God and therefore and God is so intimate with him. Moses approaches to the Lord, he comes before Him (Exod. 24, 2), has the boldness of a clean heart, unfalsifiable by any passion. 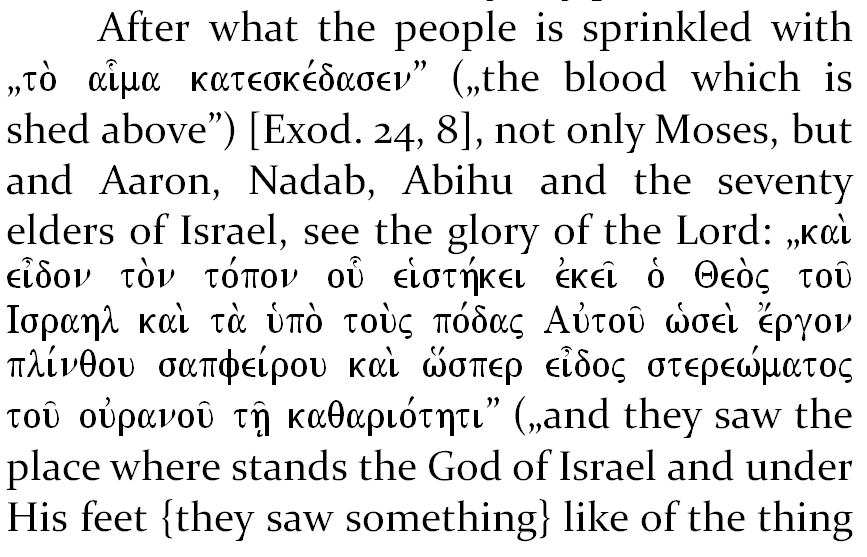 made from sapphire and this sight {had} the strength of heavenly cleansing”) [Exod. 24, 10].

moment when has been shed the typological blood, stand the Lord and may be seen by the cleaned, sanctified through it.

This ecstatic event, spent into a liturgical context, heralded the universality of God’s vision, if you reconcile with God, through the blood of His Son and you live in your intimacy the feeling of the Ghost. 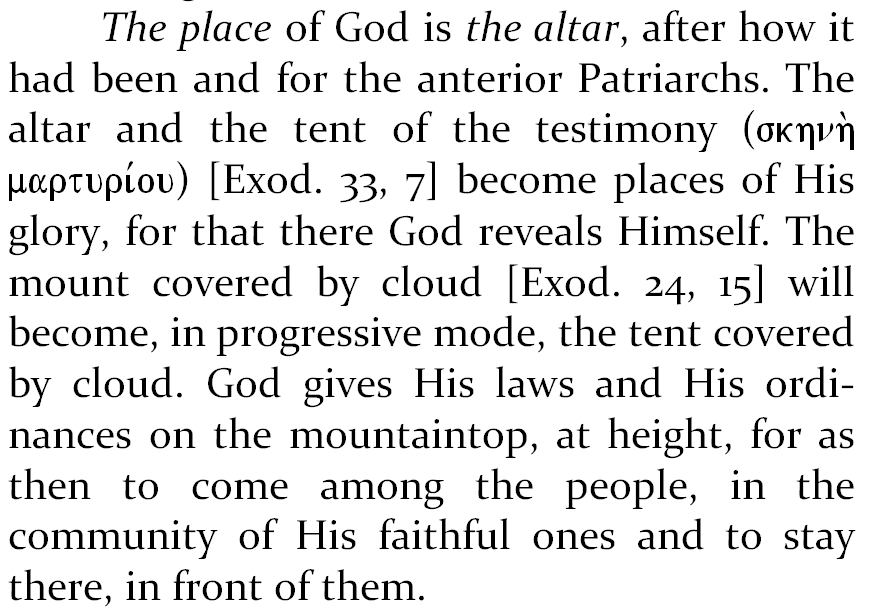 The mode in which was refelt His light kept, in evident mode, of the interior life of those who saw it. The scriptural description of ecstasies marks and the ghostual development of those who had them.

The glory of God, which appears for the first date as being in cloud, in the LXX, at Exod. 16, 10, will be evidenced by Scripture as presence and direct work of God in world.

However the ecstatic proximity is not exterior but, paradoxical, interior. We see those of God not in outside us, but in our being, in the depth of our being.

Therefore Moses stands on the plateau of mount Sinai, in the glory of God, but this glory not perceive with physical eyes but with the heart clean of passions. 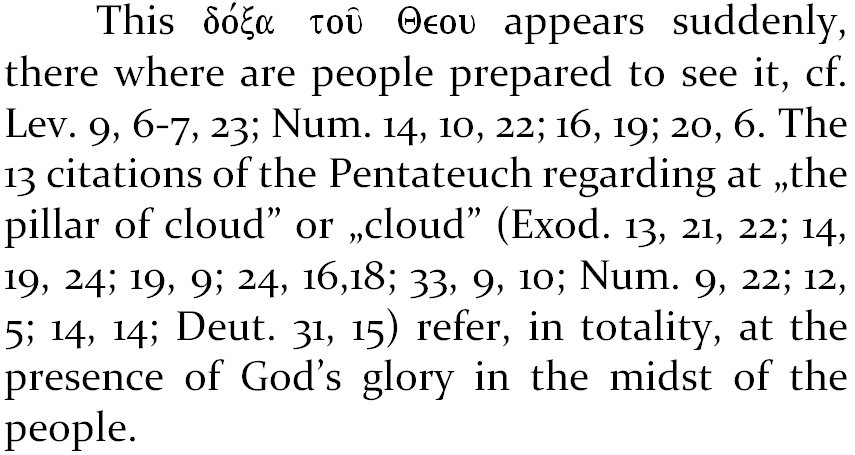 The pillar of cloud stood at the door of the tent of the testimony (Deut. 31, 15) but it filled and the whole tent (Exod. 40, 34). The light of God was irradiating all around and was comprising all where it was seen.

[1] The Lord, in the words of Scripture, is none other than God the Logos/ the Word. The presence of Son in His creation, enunciated at Jn. 1, 10, is confirmed by all His revelations towards the Saints of Scripture.

[2] But the editions BOR 1988 and 2001 encourage the idea of ​​„fear” and not „godliness”. WTT stakes all on idea of fear of Moses, which stays before the Lord. VUL speaks only of concealing face, for not to see on the Lord, without to emphasize the motivation of act done.

[4] The BOR 2001 edition is posted on the idea that people were shuddered, absorbing partial the LXX text, while the BOR 1988 edition pretake the variant offered by KJV, speaking of a strong earthquake that would be hit the Sinai mountain.

[5] In his commentary at the whole of Scripture, Robert Jamieson sees in the thunders and the lightnings from Exod. 20, 18 some „emblems of the Deity’s descent”, ie symbols, and not direct manifestations of divine glory. Although he not grants an ecstatic reality of this verse, he defends the uncognoscibility of divine being, saying that „they perceived not the Deity Himself”, cf. Robert Jamieson, Commentary Critical and Explanatory on the Whole Bible, in „Christian Classics Ethereal Library”, Pub. Grand Rapids, p. 138, cf.