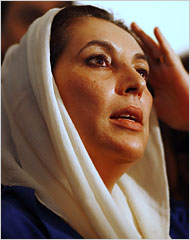 Benazir Bhutto, the daughter of a prime minister of Pakistan who held that post twice herself, died on Dec. 27, 2007 in a suicide attack on a political rally as she campaigned to hold that post a third time.

Ms. Bhutto, who was 54 at the time of her death, was a member of one of Pakistan’s most prominent families, albeit one touched by tragedy. Her father was ousted and hanged by the Pakistani military and two of her brothers died violent deaths.

Ms. Bhutto took over the leadership of her father’s party and became the first woman leader of an Islamic country when she was first elected prime minister in 1988 at the age of 35. She served a total of six years in office before being dismissed in 1996 amid widespread charges of corruption against herself and her husband. She took up residence in London.

In the summer of 2007, with the encouragement of Washington, she entered into power-sharing talks with Gen. Pervez Musharraf, who had seized power in 1999 from Ms. Bhutto’s successor. But no deal was reached, and Ms. Bhutto returned to the country in October in an ambiguous position, not quite allied with General Musharraf and not quite opposed. When he imposed emergency rule in November, she waited several days before denouncing the move.

She was leading a rally for her Pakistan People’s Party in the parliamentary campaign she hoped would restore her to power early in 2008 when she was killed.

On December 2, 1988 Benazir Bhutto was sworn in as Prime Minister of Pakistan, becoming the first woman to head the government of an Islamic State.

In the preceding decade of political struggle, Ms. Bhutto was arrested on numerous occasions; in all she spent nearly 6 years either in prison or under detention for her dedicated leadership of the then opposition Pakistan Peoples Party.

Throughout the years in opposition, she pledged to transform Pakistani society by focusing attention on programs for health, social welfare and education for the underprivileged.

Since assuming the office of Prime Minister, Benazir Bhutto has emphasized the need to heal past wounds and to put an end to the divisions in Pakistani society – including reducing discrimination between men and women. Ms. Bhutto has launched a nationwide program of health and education reform.

Benazir Bhutto was born in Karachi in 1953. After completing her early education in Pakistan, she attended Radcliffe College and Oxford University. As well as obtaining a degree in Philosophy, Politics and Economics, she also completed a course in International Law and Diplomacy at Oxford.

Ms. Bhutto is the author of „Foreign Policy in Perspective” (1978) and her autobiography, „Daughter of Destiny” (1989). She received the Bruno Kreisky Award for Human Rights in 1988 and the Honorary Phi Beta Kappa Award from Radcliffe in 1989.

Benazir Bhutto is a woman of courage and conviction and we are proud to acknowledge her with the International Leadership Award.

Obituary: Benazir Bhutto
Benazir Bhutto followed her father into politics, and both of them died because of it – he was executed in 1979, she fell victim to an apparent suicide bomb attack.

Like the Nehru-Gandhi family in India, the Bhuttos of Pakistan are one of the world’s most famous political dynasties. Benazir’s father, Zulfikar Ali Bhutto, was prime minister of Pakistan in the early 1970s.

His government was one of the few in the 30 years following independence that was not run by the army.

Born in 1953 in the province of Sindh and educated at Harvard and Oxford, Ms Bhutto gained credibility from her father’s high profile, even though she was a reluctant convert to politics.

On both occasions she was dismissed from office by the president for alleged corruption.

The dismissals typified her volatile political career, which was characterised by numerous peaks and troughs. At the height of her popularity – shortly after her first election – she was one of the most high-profile women leaders in the world.

Young and glamorous, she successfully portrayed herself as a refreshing contrast to the overwhelmingly male-dominated political establishment.

But after her second fall from power, her name came to be seen by some as synonymous with corruption and bad governance.

The determination and stubbornness for which Ms Bhutto was renowned was first seen after her father was imprisoned and charged with murder by Gen Zia ul-Haq in 1977, following a military coup. Two years later he was executed.

Ms Bhutto was imprisoned just before her father’s death and spent most of her five-year jail term in solitary confinement. She described the conditions as extremely hard.

During stints out of prison for medical treatment, Ms Bhutto set up a Pakistan People’s Party office in London, and began a campaign against General Zia.

She returned to Pakistan in 1986, attracting huge crowds to political rallies.

After Gen Zia died in an explosion on board his aircraft in 1988, she became one of the first democratically elected female prime ministers in an Islamic country.

During both her stints in power, the role of Ms Bhutto’s husband, Asif Zardari, proved highly controversial.

He played a prominent role in both her administrations, and has been accused by various Pakistani governments of stealing millions of dollars from state coffers – charges he denies, as did Ms Bhutto herself.

Many commentators argued that the downfall of Ms Bhutto’s government was accelerated by the alleged greed of her husband.

None of about 18 corruption and criminal cases against Mr Zardari has been proved in court after 10 years. But he served at least eight years in jail.

He was freed on bail in 2004, amid accusations that the charges against him were weak and going nowhere.

Ms Bhutto also steadfastly denied all the corruption charges against her, which she said were politically motivated.

She faced corruption charges in at least five cases, all without a conviction, until amnestied in October 2007.

She was convicted in 1999 for failing to appear in court, but the Supreme Court later overturned that judgement.

Soon after the conviction, audiotapes of conversations between the judge and some top aides of then Prime Minister Nawaz Sharif were discovered that showed that the judge had been under pressure to convict.

Ms Bhutto left Pakistan in 1999 to live abroad, but questions about her and her husband’s wealth continued to dog her.

She appealed against a conviction in the Swiss courts for money-laundering.

During her years outside Pakistan, Ms Bhutto lived with her three children in Dubai, where she was joined by her husband after he was freed in 2004.

She was a regular visitor to Western capitals, delivering lectures at universities and think-tanks and meeting government officials.

Ms Bhutto returned to Pakistan on 18 October 2007 after President Musharraf signed into law an ordinance granting her and others an amnesty from corruption charges.

Observers said the military regime saw her as a natural ally in its efforts to isolate religious forces and their surrogate militants.

She declined a government offer to let her party head the national government after the 2002 elections, in which the party received the largest number of votes.

In the months before her death, she had emerged again as a strong contender for power.

Some in Pakistan believe her secret talks with the military regime amounted to betrayal of democratic forces as these talks shored up President Musharraf’s grip on the country.

Others said such talks indicated that the military might at long last be getting over its decades-old mistrust of Ms Bhutto and her party, and interpreted it as a good omen for democracy.

Western powers saw in her a popular leader with liberal leanings who could bring much needed legitimacy to Mr Musharraf’s role in the „war against terror”.

Benazir Bhutto was the last remaining bearer of her late father’s political legacy.

Her brother, Murtaza – who was once expected to play the role of party leader – fled to the then-communist Afghanistan after his father’s fall.

From there, and various Middle Eastern capitals, he mounted a campaign against Pakistan’s military government with a militant group called al-Zulfikar.

He won elections from exile in 1993 and became a provincial legislator, returning home soon afterwards, only to be shot dead under mysterious circumstances in 1996.

Benazir’s other brother, Shahnawaz – also politically active but in less violent ways than Murtaza – was found dead in his French Riviera apartment in 1985.

Ms Bhutto – the first woman PM in an Islamic state – was leaving an election rally in Rawalpindi when a gunman shot her in the neck and set off a bomb.

At least 16 other people died in the attack and several more were injured.

President Pervez Musharraf condemned the killing and urged people to remain calm but angry protests have gripped cities across the country.

Security forces have been placed on a state of „red alert” nationwide.

There were no immediate claims of responsibility for the attack. Analysts believe Islamist militants to be the most likely group behind it.

Map: Scene of the assassination

It was the second suicide attack against her in recent months and came amid a wave of bombings targeting security and government officials.

Nawaz Sharif, also a former prime minister and a political rival, announced his Muslim League party would boycott the elections.

He called on President Musharraf to resign, saying free and fair elections were not possible under his rule.

The United Nations Security Council has begun emergency consultations on the killing.

Ms Bhutto’s remains have been removed from Rawalpindi General Hospital in a van. They are reportedly being taken to the city’s airport.

The attack occurred close to an entrance gate of the city park where Ms Bhutto had been speaking.

Police confirmed reports Ms Bhutto had been shot in the neck and chest before the gunman blew himself up.

Some supporters at the hospital wept while others broke into anger, throwing stones at cars and breaking windows.

Protests erupted in other cities as news of the assassination spread with unconfirmed reports of several deaths in clashes between demonstrators and security forces:

Mr Sharif said there had been a „serious lapse in security” by the government.

But an old friend of Ms Bhutto, Salman Tassir, told the BBC World Service he did not think criticism should be directed at the government.

„There have been suicide attacks on Gen Musharraf also,” he told Newshour.

„I mean it is extremism and the fanatics who are to blame.”

Earlier on Thursday, at least four people were killed ahead of an election rally Mr Sharif had been preparing to attend close to Rawalpindi.

Ms Bhutto’s death has plunged the PPP into confusion and raises questions about whether January elections will go ahead as planned, the BBC’s Barbara Plett in Islamabad says.

The killing was condemned by India, the US, the UK and others.

Ms Bhutto returned from self-imposed exile in October after years out of Pakistan where she had faced corruption charges.

He had granted an amnesty that covered the court cases she was facing.

But relations with Mr Musharraf soon broke down.

On the day of her arrival, she had led a motor cavalcade through the city of Karachi.

It was hit by a double suicide attack that left some 130 dead.

Rawalpindi, the nerve centre of Pakistan’s military, is seen as one of the country’s most secure cities.

Many analysts say attacks like those on Thursday show the creeping „Talebanisation” of Pakistan.

Radical Muslims calling for Islamic law, and fiercely opposed to the US, have become increasingly active in Pakistani politics in recent years, analysts say.