He asked the Lord to show Himself for him, to leave Himself seen, to explicit on

fact, that Moses asked something essential for someone, who loves someone else: to show Himself for me the full the Other, the One with which I speak, the One on Which I love Him.

Moses, the amorous of God, demanded on the One on Which he intuited Him, he felt Him enshrouded in His glory. We deduce from here that the glory of Lord does not appear for him as an impersonal light, cold, who does not connect with nobody, but as an irradiant environment of a divine person, of the person of the Lord.

The LXX text not inoculates the idea of ​​„face” in the request of Moses. He requires only a complete revelation of His person. But the Lord speaks about His face at Exod. 33, 20, as direct response at the prayer of Moses.

Exod. 33, 11 indicates the speech „face to face”, according as I specified anterior. But the verse quoted quintessentialised into an anthropomorphic expression the ecstatic relation between God and Prophet and does not talk about a relation of messianic level.

If this thing would have been a reality for Moses, if he would be seen with true the face of the Lord and not the light sprang from His person, he would not be asked, is understandable, as the Lord to show Himself and more clearly.

Moses not doubted of the fact that the glory on which he see it, and on which see it and the people, is of the Lord. He does not asked clarifications, but his uncurbed longing demanded the full revealing of the person of divine Logos.

According Exod. 33, 15-16, the prayer of Moses acquires new valences. The disclosure of the Lord, the sight of His person was a practical necessity and not one reflexive-dubitative. Moses longed to see on the One who was walking with them through wilderness and, especially, he longed as He Himself, the Lord, and no other, to be the One who draw out on them from their wandering.

The Lord makes absolute important clarifications in Exod. 33, 17 for our theme and namely: about the relation between the sight of God and the intimacy of man with God. The Lord accepts the request of Moses, because he found grace before Him.

To find grace before Him does not mean anything else but that he is Saint before of God. The holiness of Saint Moses is proven of quotidian sights of His glory and of his face, which irradiate of divine glow.

light is the binder between Moses and the Lord and the channel of reciprocal understanding of the two dialogical. God knows on Moses from him himself and not from outside of him and Moses entered until into the midst of the divine cloud, in the deepest intimacy with the Lord.

The relation of profoundness between Moses and God is just that which presupposes the foundation of holy boldness of Prophet. The sinful man (after how we see from the attitude of the people) sends on the Holy at the Lord as to intercede for him. Moses has full confidence in the Beloved. He requires astounding things for others, for that the love of faith presupposes that there is nothing of unrealized at God.

We expected as „the impossible” requires by Moses to be severely criticized by the Lord. But the Lord proceeds utterly different from human expectations: He shows all His glory to Moses, just with the amendment that His face is of unseen for a mortal (Exod. 33, 19-20).

Exod. 33, 20 is a scriptural personalist place, which focuses our attention at the face of God. The Lord is the One that specifies to Moses, that the irradiation of His glory must be received, for that is an irradiation of His divine person. 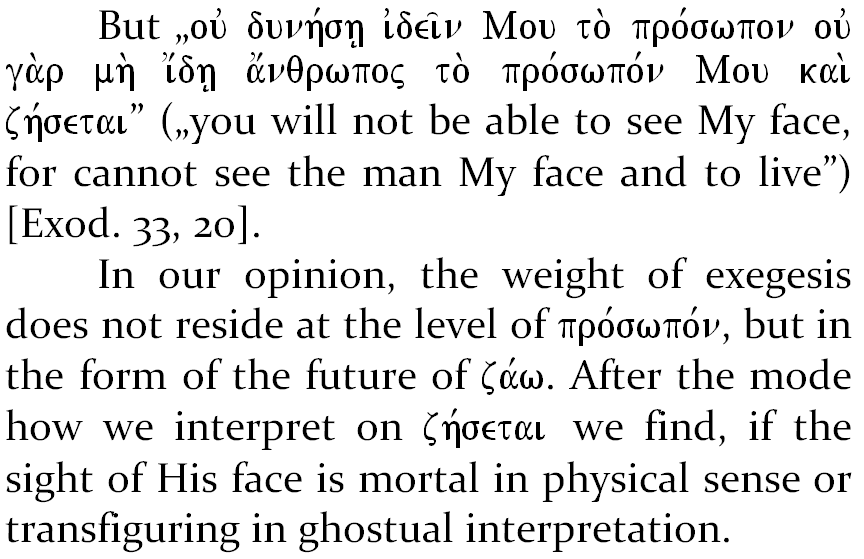 We believe, rather, that the sight of His face is not incommunicable, but that it has been postponed for Saint Moses, for that it presupposes the incarnation of the Logos and the deification of man. Moses does not see His face, in this case the person of the Logos, for that this thing was impossible for any creature. But in christological frame, Moses will see His face, for that he will see the human face of the Logos incarnate.

Exod. 33, 20 is an invitation at a postponed sight, in newtestamentary and eschatological key of His face and, in the same time, a trenchant expression of non-communion of being between God and His creature. The creature is not an extension of being of the Logos, but His glory fills the creation and sustains it.

The face of God, the concentrated expression of His person, is the one which absorbs the love of the believers, but it is not relativized and nor exhausted in the desire of people of to love and of know on God. The Lord is a divine person, Which does not hide, in duplicitary mode, under His glory, but the glory of the Lord is the one that overwhelms with all on man and this cannot be comprised of him in full mode.

The experiencing of God’s eternal irradiation makes Moses to ascertain the impossibility of absorption of God in human being, from the cause of the incommensurability of His glory and of radical difference of being between human and God[1].

If until now the glory of God was presented by us contextual and, especially, personalized, it being experienced by persons intimate with God, exists and scriptural indications in the Pentateuch, who speak about the universality of presence of His glory. 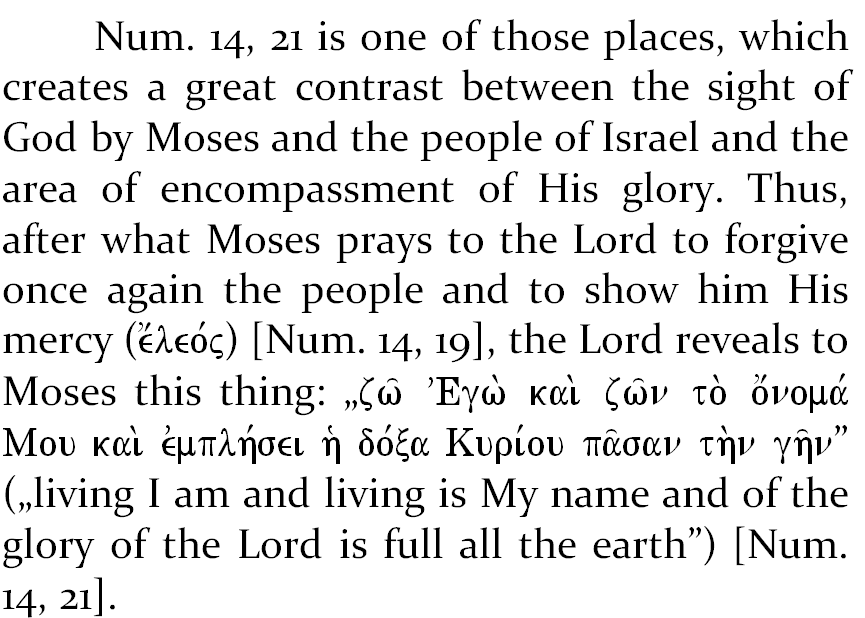 Thus, the absolute reality of God does not presupposes a regionalization of His presence, but the glory of God is over all the earth, for that He is everywhere.

But the alleverywhereity/ the omnipresence of God is not minimalized, if brings out in relief the intimate link just of a man or of more with God.

The particularization of the sight of glory of God does not exclude the incommensurability of it and nor the universality of recordation to it. In this theological perspective, not only Moses could see God’s glory, but all humans could see it.

Only that the universality of divine glory and the alleverywhereity of it does not presuppose, in automatic mode, and the personal preparation for to live it effectively.

The divine light irradiates from God everywhere in universe, but it becomes evident and it lived beyond of nature, only by that one, which makes himself a proper dwelling of revelation of God’s glory.