1. 2. 5. Elijah the Tishbite and the Ecstatic Anchoretism

If Moses is a seer of God in the context of the establishment of the Law and of the typological liturgical, ie in the liturgical community of believers, Saint Elijah has the experience of the glory of God in loneliness, in the total removal of people.

Putting in antithesis of communitarianism and of ecstatic anchoretism, we believe, must to explicit the proper frame of living of the seer of God and not presupposed value differences, at ecstatic level, between the two experiential contexts.

The sight of God does not keep of the place in which it was experienced. But, into a contextual approach of the ecstatic experiences of Scripture, the ecstatic anchoretism is a personal authentication of the glory of God and not a communautaire attestation of the presence of God in the world.

Moses has the face full of divine light in the midst of the people, for as it to be entrusted that God is with them, that He is alive and overwhelming. Elijah experiences the presence of God and His glory in the mountain Horeb, for as to be entrusted, in personal mode, that God did not let on His people without Prophets and that He has a stable link with them.

If the sight of God of communitarian type, ie that which aims a strengthening in faith of a community of believers, is an extensive sight, a divine revelation appointed to motivate experiential a lot of people, the sight of God of anchoritic type, being an intensive sight, has the role of to substantiate, at personal level, the intimacy full of boldness of the believer with God.

But the two ecstatic types does not enter into a concurential system and nor are mutually exclusive.

Moses and Elijah see the glory of God in their being and are deified by it. Only that Moses made ​​public this experience, while Elijah holds it into a private frame, restricted. The confessive dimension of the ecstatic experience will prove very important in the oikonomia of salvation and it constitutes in our only valid source of study.

In LXX, in both ecstatic contexts, does not appear this surname. We consider that through this syntagm the Vulgate intended to enroll in the tradition of emphasizing of revealing toponyms. The sight of Elijah is not a „xerox copy” of the sight of Moses from the unburnt bush. Not the place is the one that provokes the ecstasy, but God is the One who decides this moment, on the measure of interior preparation of the inghostualized.

Elijah sees on God after 40 days of traveling through the wilderness, time in 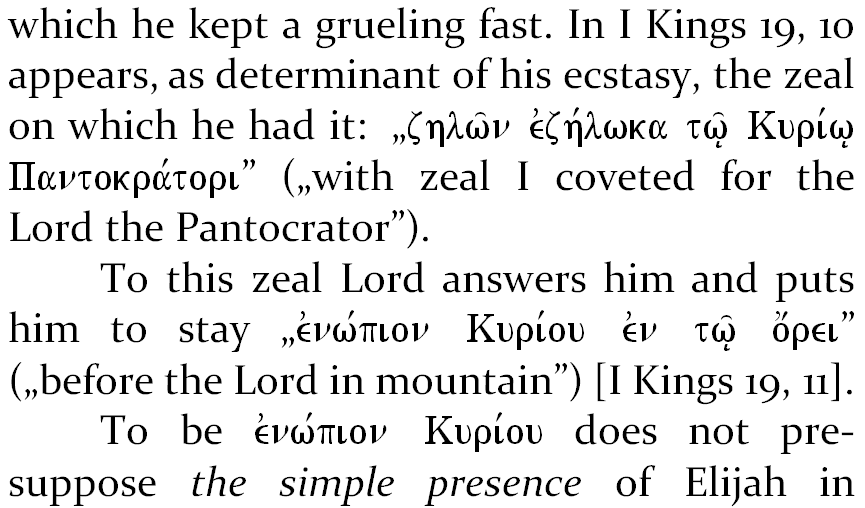 mountain, but indicates his love for God, his zeal for the Law of God and the godly life. Is not the word, thus, of an anatomical positioning in front of God, but of that full opening of his being, of his deep, towards the experience of divine glory.

Elijah prepares of the ecstatic encounter with God. The absolute particularity of this ecstasy is that it is presented as a future event, when, of fact, it had already been lived by the Prophet (cf. I Kings 19, 11-12).

In the text from I Kings we have a post-ecstatic confession from the part of Elijah, presented, from humbleness, as a prophecy, from the part of the Lord, of an ecstasy, on which he would have had to live it in the future.

So is made that in the description from I Kings, the Lord appears as the One who reveals to Elijah the fact, that this sight on which he will have it is not than a crossing of Him through the face of this one (I Kings 19, 11).

When the Lord will pass through the face of him in the time of ecstasy, and not physically, His presence will be perceived in more ways. But Elijah already living the things on which he describes.

Nobody, apart from Elijah, lives these ecstatic realities. They are realities of divine light, lived in his being and not meteorological phenomena with a catastrophic character. The retail of non-presence of God in this strong wind, at first sight contrasting, must be understood in the key v. 12. 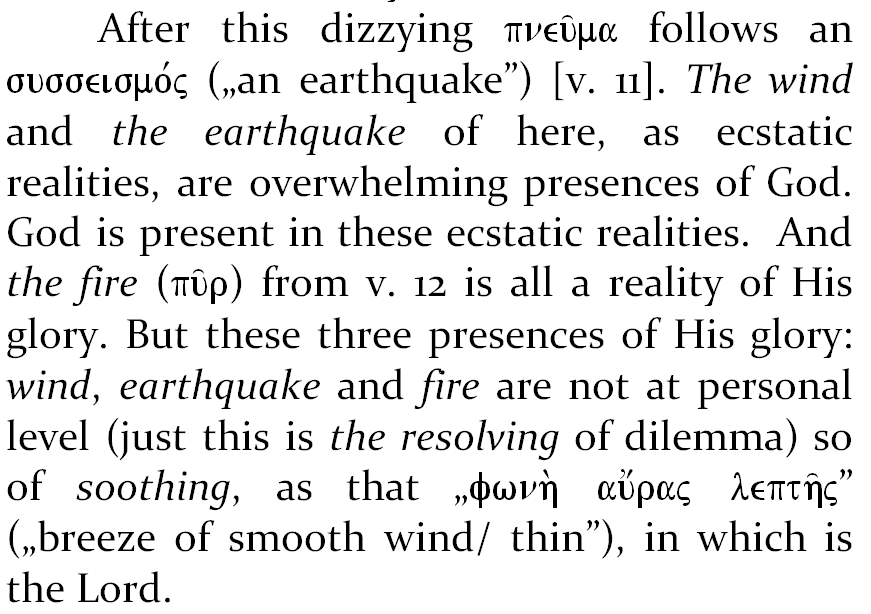 The wind, the earthquake, the fire and the smooth breeze were realities, seen in ecstasy, by the Holy Prophet Elijah, but they did not have the materiality on which we know it or we would like to have it this ecstatic scriptural description.

Discussion of ecstasies into a symbolic erminia/ interpretation or, and worse, creatural has nothing to do with a theological demarche, for that is denied the strict ghostual character of the ecstasy. All what saw Elijah from the glory of God he saw in his ghost and not in the nature from surrounding him.

His gest, which of covering his face with the mantle (v. 13) is a direct consequence, normal, of the immense godliness on which he lives after this ecstasy. He does not cover his eyes as and when he would have seen in physical mode the realities about which we talked, but here we have presented his post-ecstatic attitude, ie the state of a man full of godliness in front of God, which feels unworthy of the sight of His glory.

The final verse of the passage analyzed speaks of the interior consequences of the sight of God. The sight of God does not leave you the same, but the life of after this is with all different.