1. 2. 6. The Taking at Heaven of Elijah and the Reality of Deified Body

We cannot explain, from theological point of view, the sight of God, if it does not bring significant changes in the being of its liver. For we speak of valid ecstasy as long as it pnevmatizes the human being and not intoxicates it with passionate impulses.

The intimization with God, which is made through the sight of His glory, makes on man to be proper to the living/ the experiencing of those divine, without as the man to come out from his creaturely statute.

But the sight of His glory, although does not transform us in pure spiritual beings or does not annihilate us ontologically, leads at an integral transformation of the human, at a transparentization and transfiguration of us in the divine light.

This divine-human process of our penetration of the glory of God can reach maximum quotas, until into there that our humanity can become filled of divine light and it can enter fully into the divine light, unsticking of the temporal condition on which it lived until then.

Chap. 2 from II Kings is the oldtestamentary passage most eloquent in to prove the reality of human deification, but and its processuality. The deification of man does not appear here as an exterior charisma received instantaneous and discretionary from the part of God, but is understood as an intimate process, of long duration, cognized by the one in cause, ie by Saint Prophet Elijah. 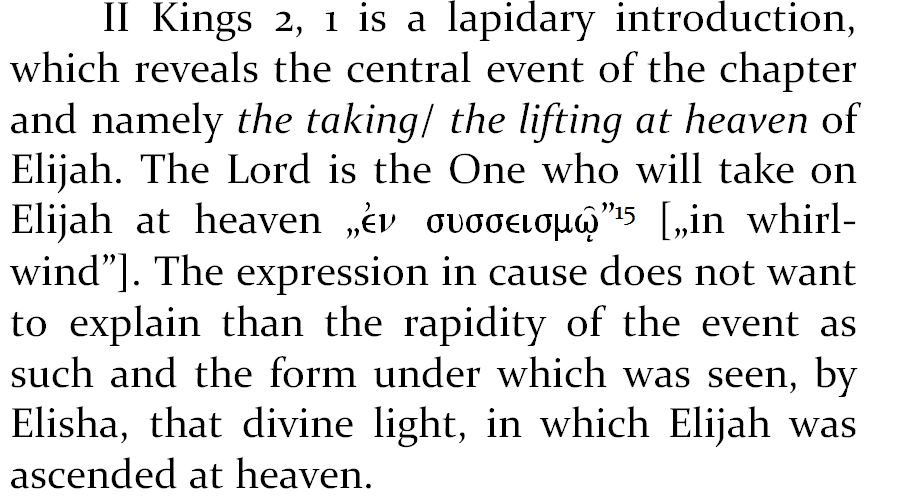 A wonted swirl is out from equation by vv. 17-18. Fifty men are looking for Elijah, the one ascended by God at heaven, time of three days and do not give of his trace (v. 17).

The Prophets from Jericho believed initially that the Ghost of God would have taken and thrown on Elijah in the river Jordan, on

These rapid trips, provoked by the Holy Ghost beyond of human understanding, were „customary” for them. Only that here was no longer word of the same gracial work of immediate transmutation of ghostualised human being into an another place, but of one more personalizing of the Holy Ghost.

Elijah is not transmuted into a temporal place, but he is taken/ raised by the Holy Ghost, is enveloped by the divine light in integrum. He enters, as a person fully ghostualised, transfigured, in the glory of God, demonstrating through this entry in the glory of God that the history and the eternity are not parallel realities but some which intersect, which interpenetrate.

The glory of God appears, both, as one that deifies on Elijah, which makes him in state by such heavenly life and of which he was fully conscious, but and a mode of life beyond of history, where Elijah enters as to enjoy of the full intimacy with God, without as to be absorbed in the being of God and without as the existence in the glory of God to be monotonous, boring.

In all this time, he knew that will spend this capital event in his life. Just therefore Elijah wants to escape of Elisha, for that he wanted to be alone when the Lord would take him to Himself. Elisha knew and he that Elijah will be taken by God and the sons of the Prophets from Bethel and Jericho have confirmed and they this fact. 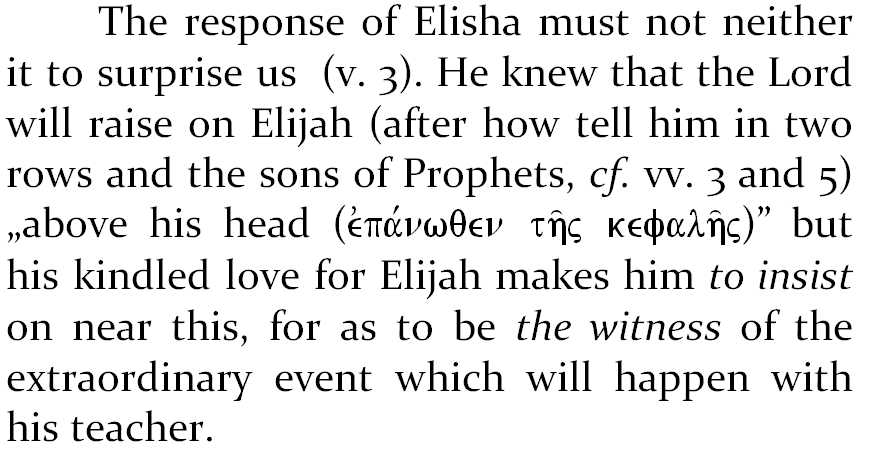 The life of God, attested through the reality of His glory, is that which makes from Elijah a man with living soul, a living man, full of the true life. „The life” of Elijah is the irradiation of God’s life, is his deification, for to be proper of God’s life, of heavenly existence. Elisha could not see in Elijah the life of God, if it had not been and in his being. And Elisha and the sons of Prophets lived the life of God and just therefore they were discovering it or was discovered to them, by God, the presence of it in others. 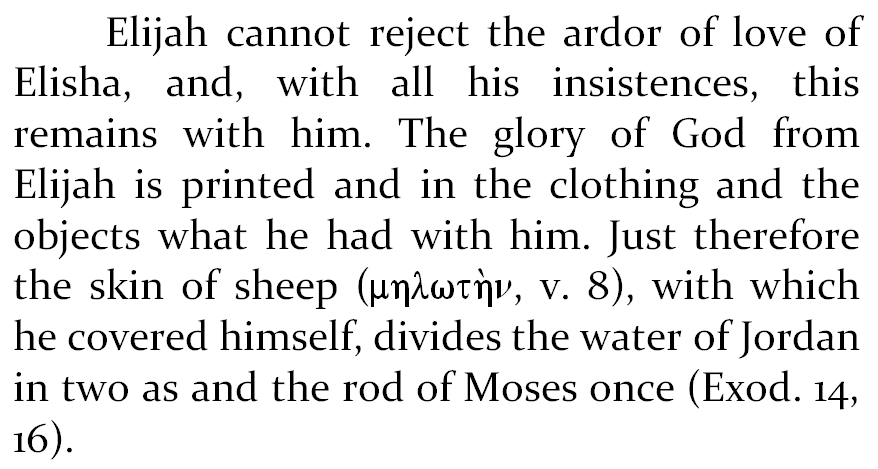 We must remark the fact that Elijah reveals to Elisha his taking from the earth, just after what both cross the Jordan (v. 9). The love of Elijah for his disciple transpires and it with power in this context, for that lets on Elisha to ask something from him before being taken to heaven. Saint Elijah is conscious that the grace of God is in him and that he reached at a degree of ghostualization, which permits him to speak openly to Elisha about his intimacy with God. Elisha does not ask in that sublime moment anything rudimentary, but only to have, in double mode, the grace of his teacher (Ibidem).

The 10th verse puts us in front of a marked detail for our theme. Elisha will receive and more grace from God, if he will be able to see the taking of Elijah at heaven. The sight on which requires Elijah to Elisha is by no means ocular and the double receiving of grace does not come from Elijah but from God. But, if Elisha will be able to see this divine raising of Elijah from earth, then and he is full of riches of divine grace and will receive and more grace, through the prayer and the intercession of Elijah, his teacher.

Elisha is put in front of the fact of to see on another man full of God’s glory, after how the people saw on Moses. Only that Elisha had to see on a man deified, which no longer remain among men, but was taken from God at Him.

The taking of Elijah to heaven does not appear here as a spectacular operation or as a necessary thing from part of God, but as a „natural” part of the process of deification on which Elijah lived.

Elijah was filled by the grace of God and deified continuously not for as to remain in history, but for as to enter with all, with body and soul, in the glory of God. The trajectory of human being is not blocked and nor segmented by death, but is discovered to be an eternized life in the eternity of divine light.

Elisha sees ghostually the concreteness of divine glory, which is approaching of Elijah and kidnaps him of near him. This sees how was ascending Elijah and finds himself shouting towards his father, which was being taken from him. The ascension was real and full in the same time. The chariot and the horses of fire are no longer seen at one time and nor Elijah. The entry of Elijah in eternity (v. 12) is all one with the fact that Elisha saw nothing anymore from this godly mutation.

Elisha does not remain puzzled by the event at that had just participated. His gest, the one of tearing in two of his garments (Ibidem), was not one of desperation, but, contrariwise, of great love, for that he saw how looks the true man, the fully deified man and this man was just the one which departed from him and which spoke with him shortly before. He felt unworthy in front of this man who was his father.

Elijah becomes the Father of Elisha, the defender of his life or this conscientizes, in full mode, the role played of Elijah in his life, then when Elijah is received by God in eternity. Elisha sees on his Father ascending to heaven and he knows that this ascension represents the unbeatable confirmation of his holiness.

The Lord raises a Saint at heaven, a man who fully intimised with Him and the human appears as a proper environment of the irradiation of God’s glory.