He endures, supports without grumbling his physical and ghostual torments, which are for the holiness of his life and not for acts of injustice. His friends seek an moral explanation for the personal cataclysms suffered by him[2], but Job defends the state of grace of his life[3].

The 38th chapter switches Job’s suffering dilemma in divine plan, for that God Himself is the One who enters in frame and gives its solution.

Both elements are ecstatic realities, seen into the Ghost[6].

His suffering appears as will/ advice/ oikonomia of God in 38, 2. The Lord speaks to him about His greatness, of His works in the world, as to make on Job to see, of above, his suffering, in report with the logic of God, which allows to those strong ghostually to know and more deeply their person, through suffering, through trial cruel, exhausting.

The Lord asks his interlocutor, as measure what He describes different phenomena and characteristics of creation, but He does not speak openly about his suffering. The fact that Job cannot understand the greatness of divine works must lead him at the conscience that his suffering, even if seems senseless, has and it a sense, as all those created or permitted by God.

But in our opinion, the 42nd chapter is not so much a untying of the mystery of suffering of Job or of the Saints but a categorical underlining of post-ecstatic life of Job. Job before of the sight of God asked to speak with God, to see where is This (Job 23, 3-6). 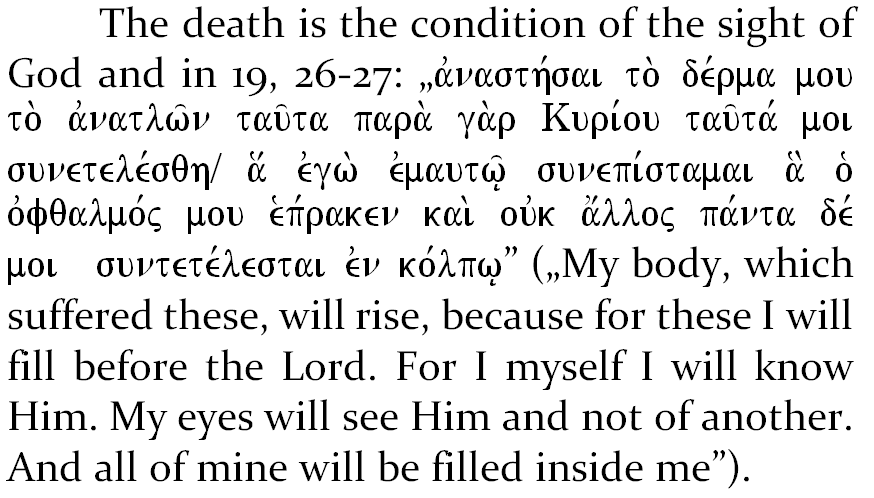 Job 42, 6, speaks about the interior consequences of the sight of God in the being of Job, which thinks of now in other parameters of intensity his relation with God. The sight of God is not a reality reserved exclusively for the life after death but it is possible and in our historical condition.

This thing understands very well Job and the problem of his suffering passes on a second plan, for that this suffering has proved enlightening, full of salvific consequences for him.

But the book Job is not without of the attestation of ecstatic experience until the ecstatic chapter par excellence, chap. 38. This chap. 38 does not bring an absolute novelty in the life of Job, for that the visions are recognized by 20, 8 and 33, 15-16 as realities, who are experienced fulgurating of quickly, on unexpected. And God enters suddenly, without warnings in the discussion of the 5, cf. 38, 1. 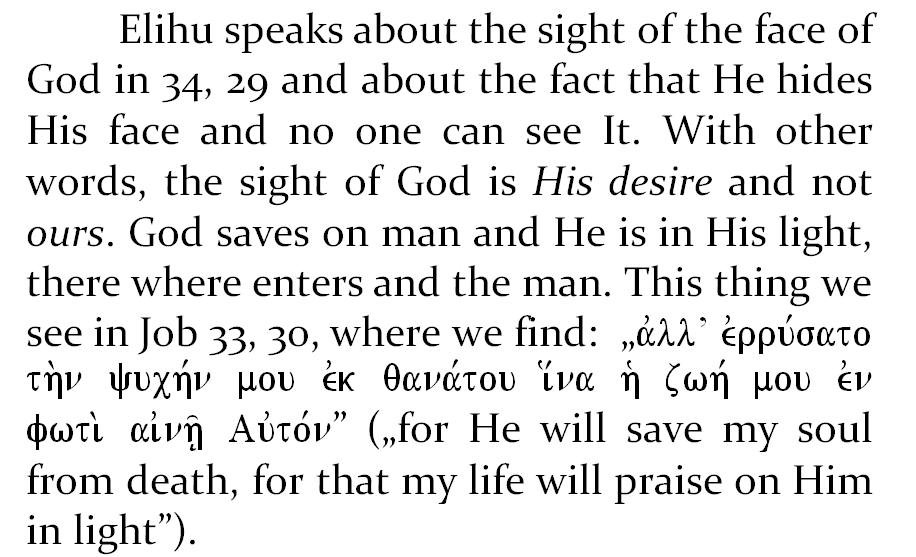 Thus the jobian soteriology, according as we found, recognizes both the reality of the face of God, as well as on that of divine light. The light of God, in which go the Saints, the saved, is the glory of Pantocrator from 37, 22 or the work/ His majesty hard of endured by people from 31, 23.

The greatness of God about which Job had spoken in his lamentation from 10, 16 is confirmed by the sight of God from the end of the book. Job knew that God reveals Himself, He shows Himself to the people. He wanted to see on God and to escape of the suffering of which he was comprised. He wanted to stand talking with God. God fulfilled this request of his love, but when He speaks no one can answer to Him.

The final of the book, as we know, relates us about his restoring in the glory on which he had before. He was happy now, for that he saw with the eyes of his heart on the Lord and he understood that this, the sight of God, is the single real desire, acute, true of the man.

[6] Saint Augustine, in his commentary at Job, interprets 38, 1 in ecstatic key, saying: „…the Lord said unto Job from storm of cloud [per turbinem nubis]. For the same voice was done and in the case of Moses, as was done when the Lord revealed Himself to the three Apprentices in mountain [Mt. 17, 1-5]”, cf. S. Aurelii Augustini, Annotationum in Job, Liber Unus, in PL 34, col. 871.

Comparing the augustinian scriptural text with the VUL text, we observe that Augustine speaks about „per turbinem nubis” [from/ through storm of cloud], while VUL speaks about „de turbine” [from storm]. The essential consists in the fact that Saint Augustine reports at his recept text and he sees very clear that here we are dealing with an ecstatic sight and not with a speech from cloud or from swirl of God, as something spectacular.