The sixth chapter from the Holy Prophet Isaiah is an explicit paradigm of ecstasy, a punctual detailing of what was seen in ecstasy, ie a description more close to the ecstatic relatings from the Lives of the Saints and of what the postmodern believer seeks, in his hunger after special experiences, exotic. Here, Isaiah describes the vision on which he had in the year of death of the king Uzziah (6, 1).

The ecstatic concreteness transpires from the fact that are described heavenly realities, what cannot be seen physically, but just ecstatically.

His glory fills, overwhelms all what exists in His house. The Seraphims, who stand around Him, are and they overwhelmed by it (6, 2).

Their description from this verse remained normative for the prayers from Moliebenion [synonymous with Euchologion or with Trebnik and it translates the romanian word Molitfelnic], which describes the appearance of the Cherubims. The Cherubims are around Him[2].

The location of the Cherubims does not belong to Isaiah but it is a creaturely given, on which he sees it in his ecstasy.

The Seraphims are around Him but they are not static, unflinching perchance in the decor of the divine glory. Although their interior seating is of deep coyness before God, the Cherubims fly, move (6, 2).

They cover their faces and the legs with their wings, into a gest of the greatest godliness and delicacy and trembling in front of God, but, in the same time, they fly and are dialogical (6, 2-3).

Their condition of beings which surround on God does not enter into disagreement with their natural power of to be dialogical beings, which communicate between them through the song on which they bring it to God.

The dynamism does not contravene to the dialogical communion in the category of the Cherubims.

If 6, 1 specified the fact that the glory of God is the one that fills the heaven, v. 3 extends the relation of glory with His creation, saying that and the earth is full of the presence of the divine glory.

The heavenly Powers, with other words, are not privileged in absolute mode. Although they are around God, in comparison with the man or the cosmos in its integrality, however the man and the cosmos are filled with the glory of God, of His energetic presence. God is in His creation through His grace and He maintains the existence of His angelic and terrestrial creation. 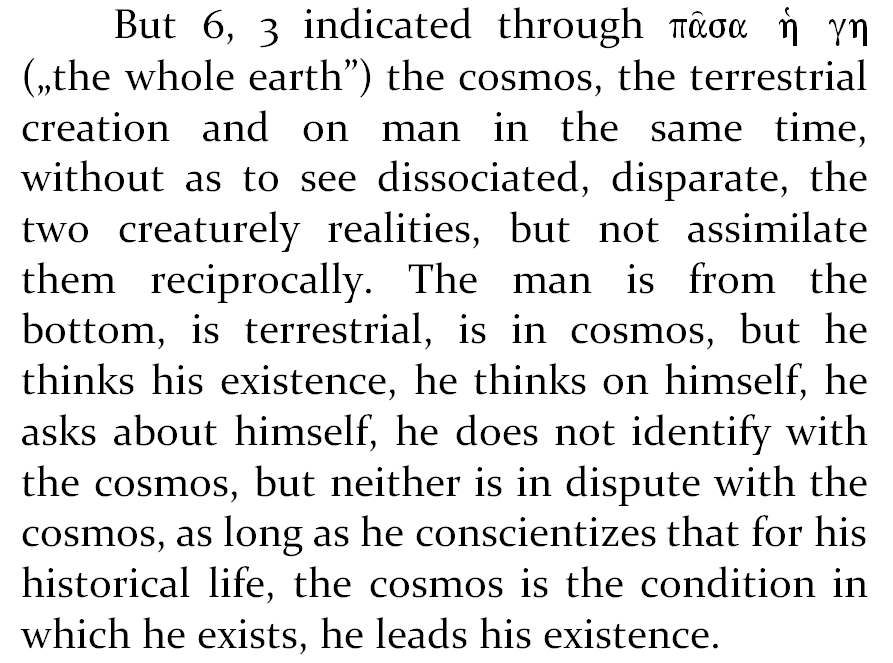 But his insertion in history and in cosmos does not make on man to see a separation between heaven, between the house of God, and earth, as long as he feels the glory of God.

Isaiah sees the heaven full of glory but and the earth. The sight of the omnipresence of the divine glory is the greatest experience of God’s existence, of this living God and not dead. Then Isaiah had the absolute certitude of the reality of God, for that he saw what irradiates from Him, from his God.

The earthquake on which provokes the glorification of the Cherubims, what and the smoke which filled the house of God are not then forms of the divine light, aspects of the light seen in ecstasy by Isaiah and not phantasmagoric representations of his mind.

The whole ecstatic landscape is not elected by Isaiah, but by God. Isaiah sees what God gives to him, what lets him to see from ecstatic point of view. Isaiah is the spectator full of grace of the Kingdom of God, of the Kingdom or of His House, into which the Lord sits on the throne of His glory, surrounded by Cherubims.

The sight of God and of His glory trigger in Isaiah, in ecstasy, a deep understanding of his sinfulness. His sight and of the Cherubims shudder him, stir him definitively, understanding instantaneously that he is a sick man, defeated by sin (6, 5). 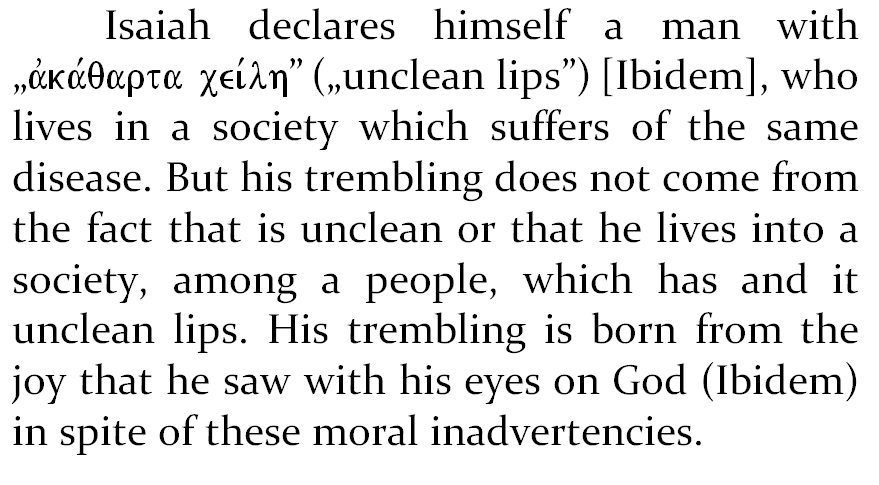 The mercy of God made with him fills him of wonder and of love in the same time. He is perplexed by the love of God, Who does not looked at the uncleanness of his being, but at the fact of rejoicing on Isaiah with the reality of His presence.

The impartation of the heavenly reality of God has immediate consequences. At the question of the Lord, Isaiah responds immediately (6, 8). He wants to be the messenger of God for the people of Israel. If he feels with clean lips, ie a new man, Isaiah has the courage to speak to a people with old lips and beings. Is. 6, 9-13 represents the message of the Lord towards people, uttered all ecstatic.

The ecstasy of Isaiah, in conclusion, does not separate on Angels from men and nor dogmatizes to us a lack of God’s presence in heaven or on earth. The energetic presence of God transforms on man, makes him to have the courage and the zeal of the confession full of love of God.

The man who experienced the glory of God cannot be ideologized somehow, as long as he has raccordation at source, ie at the energetic reality of God.

[1] Commenting Is. 6, 1, Saint John Chrysostom was wondering rhetorically and answered the following: „Why it is said that it was raised and that is lofty? Nothing else is shown through the fact that it was raised, than that is sign of all the work and the power and the strength above all else”, cf. Joannes Chrysostomus, In Isaiam, Vidi dominum (homiliae 1-6), [text cf. Jean Chrysostome, Homellies sur Ozias, ed. J. Dumortier, Pub. Du Cerf, en SC 227, Paris, 1981], apud TLG #498.1.3.9-#498.1.3.12.

[2] The BOR 1988 edition speaks of a lay of the Cherubims before the Lord. The BOR 2001 is faithful to the version presented by the LXX, using: „around Him”. But VUL uses a rich expression from the point of view of ghostual experience: „Seraphin stabant super Illud”. We translate this text through: „The Seraphims stood in His height”, much closer to Him.

The Seraphims, cf. VUL, not only that they were seen in His glory, but they were seen by Saint Isaiah in the top of His glory, somewhere above than other heavenly creatures, ie into a greater intimacy with God. The latin version of Scripture not only that insinuates the heavenly hierarchies, but even statutes them. As long as in Scripture appears more namings of some heavenly Powers, is normal as these to have a higher degree of intimacy or lower with God and a localization of the degree of experience of His glory. The vision of Isaiah records the fact that the heavenly hierarchies are not representations of a celestial imagery, borrowed from other religions, but is a heavenly reality observable ecstatic.

But we must emphasize the fact that the form of future of „to delete” and of „to cleanse” existent in LXX, as and in the translation quoted of the Liturgikon, must not be understood in eschatological key, but in the actual key and dynamic. To us begin to erase us the transgressions and to cleanse us the sins from the moment of impartation, but this beginning of cleansing is not hachured by the eucharistic moment and nor does reduce at it, but it continues, unrolls in all that day and throughout our life.

The consequences of the cleansing of sins through the impartation with Christ are continuous and absolute vital for us. The throwing of the cleansing of sins in everlastingness break us of this living understanding, unaltered of the real union, direct with the life of Christ from the Holy Eucharist. The interior feeling of the glory of Christ through impartation is what makes us to be contemporaries with God and to feel Him as on a living Being, irradiant and not as on a frightening statue into a giant dome, overwhelming.