Saint Daniel has two shaking visions in the chap. 7. These relates us about the greatness of the Father and about the Son of man, Who appropriates the humanity in full mode and brings it on the seat of godhead.

His visions are, in the same time, ascertaining and prophetic. On the one hand, he sees the current things from the Lord’s house, on the other hand, he sees things what keep of the oikonomia of salvation and of eschatology. 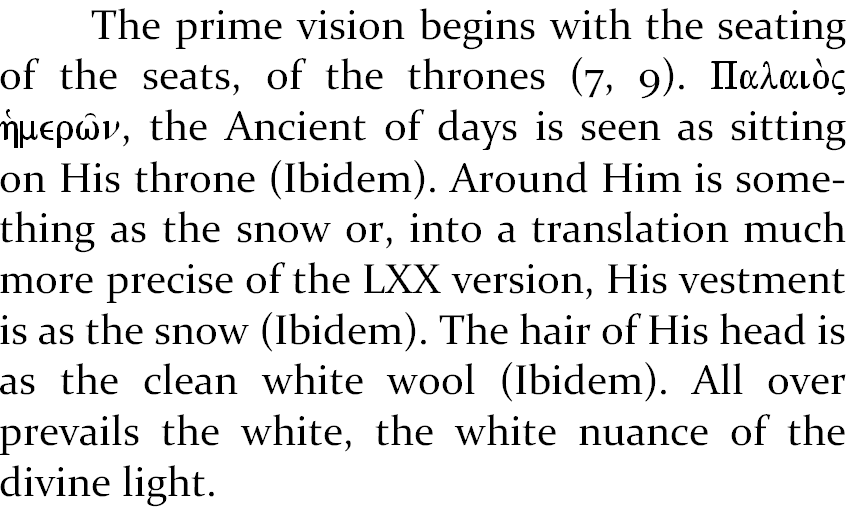 The colour of His throne does not enter in contrast with the white of light although is alike a flame of fire (Ibidem). The light and the fire are two nuances of the same divine reality and therefore they cannot be seen disjunctive.

Those who are seen in ecstasy do not integrate in the human logic with which we are taught. The ecstatic moment teaches you to think superlogical and not logical.

The transition from the image of the Father, from the description of His greatness, of His veiling in light, at the hypostasis of Judge is made immediately, although for us it presupposes the fullness of history and the entry of the cosmos in eternity. Daniel sees the history from above, through God’s eyes and just so and he describes it. 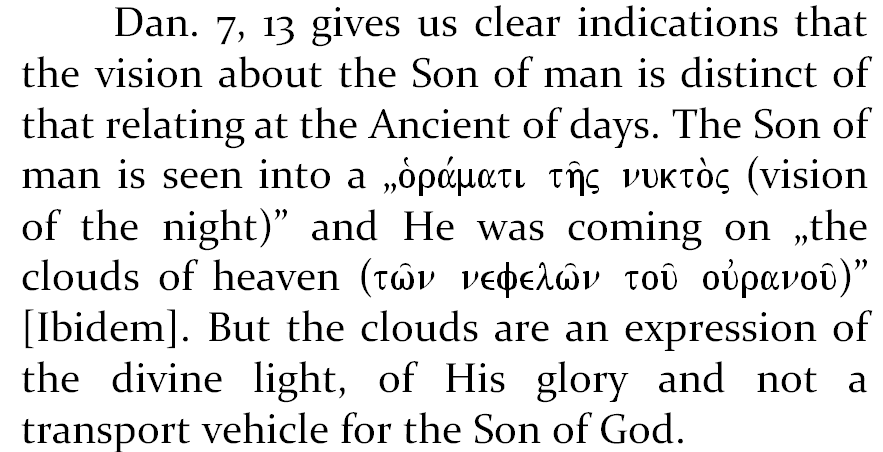 The Son of man comes and sits in front of the Ancient of days, without as this thing to be considered a defiance at the address of This one (Ibidem). Contrariwise, the Ancient of Days gives all the power and all the nations of the earth and all His glory to the Son of man (7, 14). Father gives His integer glory and to the humanity assumed of the Son. The moment of Christ’s entry in the Father’s glory, a moment of oikonomia of salvation, was an ecstatic reality before to be a factual reality.

Daniel sees before the ones of oikonomia of the Son, being raised by the Holy Ghost in ecstasy. His visions authenticate the history, for that presage the fundamental events of history, but the most important thing is that one, that his visions presage and the history of eternity.

From them we learn what happens with us in eternity, that will be the course of our eternal life. The glory of God is the existential atmosphere of eternity in which we will enjoy of the presence of God.