We begin the newtestamentary exemplifications concerning the problematic of the scriptural ecstatic with Lk. 2, 8-14. To us seemed natural to do this thing, for not to enter directly in Mt. 17, ie into a classic example of sight of the divine glory.

But, on the other hand, we held to present the ecstatic events of the Evangels in tandem with the historical life of the Lord and not in rapport with the toponymy of the textual fragments which have ecstatic evidences.

The shepherds, which, at first sight, seemed some poor mortals which were grazing the flocks in the middle of night, become, in the context of 2, 9, some veritable seers of the divine glory and of an extraordinary angelophany. If they could see the glory of God, then their sleeplessness must be regarded as state of wakefulness, of clean waiting of God’s presence in their life.

The glory of the Lord, on which had seen it the Saints of the Old Testament is revealed now and to the shepherds. This divine reality bears the same name as in the LXX and it is shown in different contexts, but to some people Saints, with a clean life.

The holiness, notwithstanding of any hierarchical or social rank, dwells in people who do the will of God, so and in the common people and unheeded as and these shepherds. The retail that the glory of the Lord appeared on field and not in the temple from Jerusalem, leads us at the conclusion that the glory of the Lord does not hold of the place in which it is seen but of the state of the persons who experience it.

A look of ensemble on v. 9 highlights us something very important for us. From the topical of this verse does not appear that God’s glory was seen by shepherds, for that it held, necessarily, of the sight of this Angel of the Lord.

The shepherds see in ecstatic mode both on Angel, as well as the glory of God. The glory is not a fog or a breeze which encloses on shepherds, but a divine reality, seen ghostually, which fills them and frightens them, cf. Ibidem.

The transformation of this fear, through a dangerous hermeneutic of experimentation of the terrible and of the terrifying, into an anguishing fear of God, who panics you, who makes you be delirious, into a true interior frighteness who hunchs you at proper, does not lead than at a demonic interpretation of the ecstasy.

In this hermeneutical key, the ecstasy would not be followed of joy and of holy trembling, ie of beneficial things for human, but of a maladive state of fear, as a monopolizing agitation without interior substrate.

Their vision acquires new proportions. We highlight the fact that in the case of the shepherds we are dealing with a collective ecstasy, in comparison with the personal ecstasies described so far. All the shepherds (does not say how many) saw on the Angel of the Lord, who spoke to them and the glory of God covered everything around them. 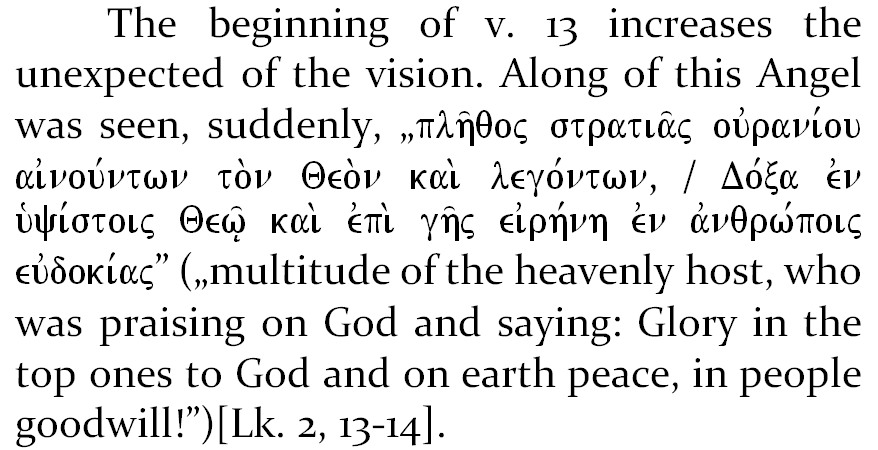 The Angels appear praising on God and desiring the peace of the world, the good understanding of people, the communion of humanity in its integrality. The unity of the heavenly host, the dynamism and its awake doxological sense must be cultivated also by people. The humanity one, created with a dynamic interior and with the doxological sense of the relation with God must revitalized.

In the angelic doxology from Lk. 2, 14 the humanity is not eliminated from calculation, but is constitutive part of the doxological community of God’s creation. The people are together with the Angels a single Church, a single doxological unity created by God.

These things must be known by shepherds. They had to understand that Christ came from the top ones and that the people must be all the same of united, as and Angels, in their liturgical community and in society.

According to Lk. 2, 15, the Angels have gone in heaven and the shepherds remained alone, motivated into a total mode as to get at Bethlehem. The vision has ended suddenly. They have not seen anything, but they were one in their mind, for that they forgot of flock and spoke only of the place where Christ was born.

The glory of God has not been put at doubt by shepherds and nor the words of the Angel. The shepherds have trusted in God’s revelation and did not consider it a hallucination or a demonic illusion. They went and had seen on the Lord, and after they saw Him they returned doxologing at their homes (Lk. 2, 15-20). 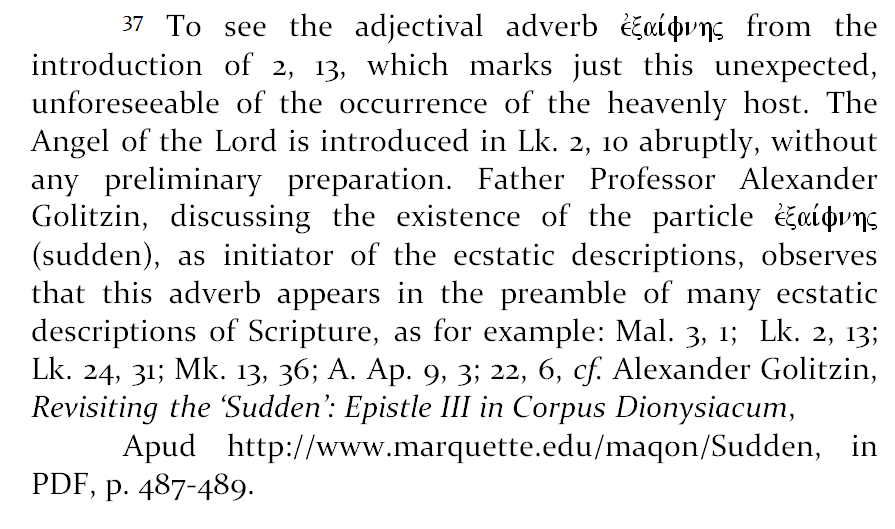